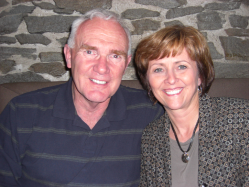 "We all need to have some type of post-secondary education after high school. It could be as an apprentice, a vocational-professional program or a transfer degree. To me, this is key to a productive life and society… it is the key to advancement and promotion to go forward.” - Greg Franz

Greg Franz started his career at Wenatchee Valley College in 1988 as a Physical Education professor and the Men’s Basketball coach. In 2011, he was promoted to the WVC Athletic Director (AD). With this new role, he stepped away from coaching and teaching. Reflecting on his greatest memories from that time, the transformation of students from high school to moving on from WVC stood out. Over 67 young men went onto 4-year college basketball during his 30-year career. This transformation was Greg’s favorite part of his job, whether in academics, athletics, or personal responsibilities.

Whatever the circumstance, Greg loved being a part of the transformation and the opportunity to inspire growth. “That was the cornerstone and what I remember as important. The games get lost in decades of coaching but the kids, they stick with you,” says Greg.

Greg had a short retirement in 2018 before stepping up in December 2021 to serve as the Interim Athletic Director at Wenatchee Valley College. “The pandemic changed everything,” says Greg. “Recruiting was different, competition was different, reaching out to community was different. You couldn’t have fans in the stands. Now, I am able to help with the reemergence and reopening of the WVC athletic community both on campus and the greater Wenatchee Valley.”

One thing that has remained consistent over the years has been the Wenatchee Valley College Foundation’s impact on the WVC community. “Partnering with the Foundation enables us to provide a safer, classier, quality experience for our athletes,” says Greg. In 2016, during Greg’s tenure as AD, the foundation partnered with the athletic department to replace the Smith Gym floor since state capital funds cannot be used on athletic facilities. The fundraising effort resulted in over $200,000 raised from the community and a safer facility for student athletes.

As Greg looks forward to his second retirement, he will always have a connection to Wenatchee Valley College. Not only through his support and involvement as a community member, but through his own love story. After his first wife, Janice, passed away, Greg met Janet while working at WVC. She was the executive assistant to the WVC President at the time. “Janet and I went to lunch, had a conversation over lunch, and never stopped talking!” They celebrated their 20th anniversary in August 2021 and look forward to traveling and spending time with their five grandchildren once Greg retires again.

“The college is full of really good people,” Greg says. “Anytime your life can be touched by the quality of people here, you are richer for it. It has been a good investment.”